The Downeast Shamrock is now online! 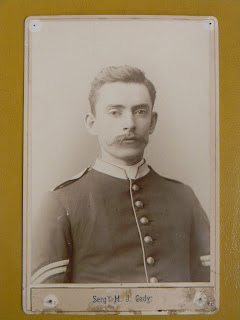 Portrait of my great-great grandfather 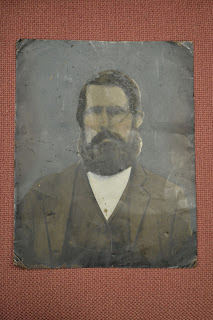 This is a tintype photo of THOMAS GILLAN (1827-1893), probably taken in the late 1870s. Tom was a resident of Hammonds Plains, Nova Scotia. He and his wife Mary Anne Deighan raised eleven children, including James Gillan, great-grandfather of Matthew J. Barker.
Posted by MGB73 at 8:16 AM No comments:

This is Part Three of our on-going feature that will explore the surnames indigenous or common to the County Galway.
This series will not feature every surname found in Galway, but hopefully the majority will be treated here. For more information on the following surnames and others, please consult Edward MacLysaght’s THE SURNAMES OF IRELAND (Irish Academic Press, Dublin, 6th Edition, 1999) or Michael C. O’Laughlin’s FAMILIES OF COUNTY GALWAY (Irish Genealogical Foundation, Kansas City, Missouri, 1998). MacLysaght is still the acknowledged expert on Irish surnames, although he has since passed away.
The entries will usually include a brief background on a given surname, along with various spellings, corruptions, anglicized forms, and other variants. Irish Gaelic spellings of the names can be found in MacLysaght’s work when not recorded here.

(O) CONNOLLY, CONNELLY, CONLEY
This name is quite common in County Galway, especially in Connemara.  It is also found in Monaghan, Meath, and Fermanagh. It is O Conghaile in Irish and often confused with CONNEELY. A common spelling is CONNELLY; both names morphed into CONLEY in America. CONLY, CONOLLY.

(O) COSGRAVE
A surname found also in southeastern Leinster, it is common in Connacht, especially in Mayo and Galway where it is usually spelled COSGROVE. COSGRIFF & COSGRY are variants.

(Mac) COSTELLO, COSTELLOE
This surname, derived from Oisdealb, the father of the Norman Gilbert de Nangle, hence Mac Oisdealbhaigh in Irish, is quite prevalent in Galway and Mayo. It is often spelled COSTELLOE in Ireland, but COSTELLO in America.  COSTLEY. COSTELLOW. COSTOLLOE. COSTELO.

(O) COYNE
COYNE, O Cadhain in Irish (from the Irish for wild goose, cadhan), is a common Galway surname, especially in Connemara where it has also become KYNE and KINE. This name has many other variants, including BARNACLE (a synonym by mistranslation), COEN, and KILCOYNE. Corruptions and variants include COIN, COYN, COINE, KOEN, and COAN.

CRAUGHWELL
This surname belongs almost exclusively to eastern Galway, where it originally takes its name from the village of Craughwell.

CRAVEN, CREAVEN
This surname is common to eastern and northeastern Galway. It is O Crabhain in Irish and sometimes spelled CRAVANE. Although some individuals in a given family spelled the name both CRAVEN and CREAVEN (both spellings once seen on one naturalization paper!), the Irish and Irish speakers usually spelled it CREAVEN, while English and English speakers wrote it as CRAVEN. CREAVAN. GRAVEN.

(O) CREAN, CREHAN
A sept of County Donegal also found in Sligo, Clare, and Galway. O Croidheain in Irish, it is found in Galway usually as CREHAN. CREAGHAN. CREGAN.

CUBBARD:   A non-Gaelic name found in the Claddagh area of Galway, probably a corruption of CUTBIRD, itself a corrupt form of CUTHBERT.

CULKIN:    originally from County Mayo and said to be a branch of the STAUNTON family. Variants include CULKEEN and MacQUILKIN.

(O) CUNNEEN:   Mac Coinin in Irish, it is found mainly in Galway and Clare, where some of the name changed their surname to RABBITT (from the Irish for rabbit, coinin). CUNNANE.

(O) CUNNEGAN:  A sept of the Ui Maine, anglicized as CUNNINGHAM according to MacLysaght.  See CUNNINGHAM.

CUNNINGHAM: This Scottish surname has been used in Ireland as the modern form of many Irish surnames (see CUNNEGAN). Found especially in East Galway.

(Mac) CURLEY:   This is Mac Thoirdealbhaigh in Irish and is a variant of TURLEY, which is found in Ulster. Found in Counties Galway and Roscommon.

(O) CURRAN:   This surname is found throughout Ireland, especially in Connemara. It is O Corrain in Irish and has also been spelled CURRANE, CURREEN, and CURREN.

(O) CURRY:  O Comhraidhe in Irish, it is found in Galway, Clare and Westmeath. CURRIE. CORRY.

(O) CUSSANE:   O Casain in Irish, this name is found in the Ui Maine country of County Galway.

MacDADE:  A variant of MacDAID, which is found in Donegal. It is Mac Daibheid in Irish and means son of David.

(O) DALY:   O Dalaigh in Irish, it is found in Galway, Clare, Cork, and Westmeath. It is often spelled DAILY or DALEY in America. DAWLEY, DAILEY.

DARCY:   This is O Dorchaidhe in Irish and is one of the Tribes of Galway. It is also found as DORCEY, DORCY, and D’ARCY.

MacDAVIE, MacDAVY:   This family is a branch of the BURKES of Connaught. The barony of Ballymoe in Galway in the 16th Century was known as MacDavie’s Country. See DAVIS.

DAVIS:  This is a common Welsh name, but is found in Cork and also in Connemara, where it may be perhaps an anglicized version of MacDAVIE.

(Mac) DAVOCK:   Another branch of the BURKES of Connaught, spelled Mac Dabhoc.

DEANE:   One of the Tribes of Galway, originally le Den according to MacLysaght. DEAN.

(O) DEELY:    This is O Duibhghiolla in Irish often spelled DEELEY. People of this name all originated in County Galway.
Posted by MGB73 at 8:14 AM No comments:

The Maine Irish Heritage Center's genealogy program is coming along very nicely. Every week, sometimes every day, people come in and discover more about their Irish heritage. Many people have taken DNA tests and have discovered they are related to many other Portland Irish people who have taken the test...Maureen Coyne Norris and Margaret Feeney LaCombe, who went to high school together, never knew they were related until they took the FamilyTreeDNA family finder test...they are third cousins!!
Discoveries of this nature occur weekly....some people have discovered they are related to eight or more people who have taken the test...the results have been truly amazing!
The MIHC currently has DNA tests available for purchase...price as of August 2012 is $250.00...
FMI, 207-780-0118
Posted by MGB73 at 10:18 AM No comments:

Email ThisBlogThis!Share to TwitterShare to FacebookShare to Pinterest
The Maine Irish Heritage Trail was established in 2008 by Acro-Global Company of Boothbay Harbor, Maine and compiled by Portland historian and genealogist Matthew Jude Barker...the trail will eventually cover all of Maine...thus far Portland and South Portland have been finished...Westbrook is near to completion.....for mistakes and omissions, please contact the author at mjudebark@gmail.com.  An updated version will appear in the immediate future hopefully

The next Irish genealogy roundtable at the Maine Irish Heritage Center will be Saturday, August 4, 2012, 10AM to 2PM...bring your genealogy, photos, lunch, whatever....come one, come all!
Posted by MGB73 at 8:57 AM No comments:


The Ancient Order of Hibernians will host their 14th annual Mass atthe Famine Memorial in the Catholic Ground at the Western Cemetery (Portland)on Sunday, August 12, 2012, at 1 PM. A reception will follow at St. Patrick'sChurch on Congress Street.
The Famine Memorial stone was dedicated in August 1999 by the localAOH to honor the more than 1,200 Irish Catholics buried on the Catholic Ground,most without headstones The service will also remember an Gorta Mor, the Great Hunger, the Irish potato famine in Ireland(1845-51), in which at least 1.2 million Irish perished due to hunger anddisease. This famine was in actuality an "artificial" famine broughton by callous landlords, corrupt and apathetic British bureaucrats, and anextremely inefficient land system.
Most of the Catholics buried in the Catholic Ground were famineemigrants or their children, who died during the "Famine Decade" of1845-1855. They were mostly all communicants of nearby St. Dominic's Church(now the Maine Irish Heritage Center) where more than 500 Irish emigrantsjoined the church in "Black '47," the worse year of the Great Hunger.
Posted by MGB73 at 8:55 AM No comments: